We are absolutely thrilled to announce that Anima Brass has been selected as the Fellowship Brass Quintet at the 2016 Aspen Music Festival and School! This incredible opportunity to study with the American Brass Quintet during this summer’s festival in Colorado is one for which we are all beyond grateful.

Thanks to our coaches Michael Powell and Kevin Cobb for their guiding wisdom, and also to Stony Brook University composer Flannery Cunningham who crafted a wonderful piece for our ensemble that was included on our submission!

Founded in 1949, the Aspen Music Festival and School is regarded as one of the top classical music festivals in the United States, noted both for its concert programming and its musical training of mostly young-adult music students. The typical eight-week summer season includes more than 300 classical music events—including concerts by five orchestras, solo and chamber music performances, fully staged opera productions, master classes, lectures, and children’s programming—and brings in 70,000 audience members. In the winter, the AMFS presents a small series of recitals and Metropolitan Opera Live in HD screenings. 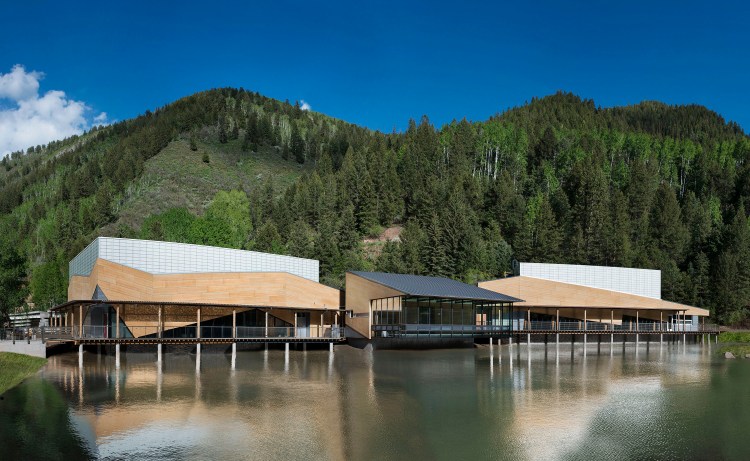 The campus of the Aspen Music Festival and School

Kaija Saariaho’s L’Amour de Loin will be the centerpiece of the summer. Conducted by Robert Spano and directed by AOTC director Edward Berkeley, the semi-staged performance will take place in the Benedict Music Tent with an international cast of singers and chorus.

Another hallmark of the Festival has been a wide variety of lectures and enrichment events, as well as collaborations with organizations such as the Aspen Santa Fe Ballet, the Aspen Institute, Jazz Aspen Snowmass, the Aspen Art Museum, and the Anderson Ranch Arts Center.

Baroque music has elicited a tremendously positive reaction in recent years, so another evening of Baroque music will once again feature guest artists and artist-faculty, side by side with several of our 2016 students.

The Aspen Music Festival and School was originally founded in 1949 by Chicago businessman Walter Paepcke and Elizabeth Paepcke as a two-week bicentennial celebration of the 18th-century German writer Johann Wolgang von Goethe.  The event, which included both intellectual forums and musical performances, was such a success that it led to the formation of both the Aspen Institute and the Aspen Music Festival and School.

In the summers that followed, the participating musicians returned, bringing their music students, and the foundation was set for the AMFS as it is known today. In 1951, the School enrolled its first official class, with 183 music students.  That same year, Igor Stravinsky became the first conductor to present his own works with the Festival.

Early founding musicians included baritone Mac Harrell (father of cellist Lynn Harrell) and violinist Roman Totenberg (father of NPR legal correspondent Nina Totenberg). Early performance highlights include then-student James Levine conducted the Benjamin Britten opera Albert Herring in 1964, coinciding with Britten’s visit to Aspen that summer to accept an award from the Aspen Institute.  In 1965, Duke Ellington and his orchestra came to the AMFS to perform a benefit concert.  In 1971, Dorothy DeLay joined the AMFS strings artist-faculty  and attracted more than 200 students a summer to her program. In 1975, Aaron Copland came to Aspen as a composer-in-residence  on the occasion of his 75th birthday. In 1980, John Denver performed with the Aspen Festival Orchestra for his TV special Music and the Mountains, which aired the following year on ABC.  Multiple artist-faculty members have also recorded albums while in Aspen, including the Emerson String Quartet, which recorded the Shostakovich: The String Quartets 5-disc set from AMFS venue Harris Concert Hall  and won the 2000 Grammy Award for Best Classical Album.

The Benedict Music Tent, which opened in 2000, is the Festival’s primary concert venue and seats 2050.  The tent replaced an earlier tent designed by Herbert Bayer, which in 1965 replaced the original smaller tent designed by Eero Saarinen.  Concerts are held in the Benedict Music Tent on a nearly daily basis during the summer, and seating on the lawn just outside the Tent, where many choose to picnic during events, is always free.  The design has open sides; the curving roof is made of Teflon-coated fiberglass, a hard material also used by the Denver International Airport.

The 500-seat Joan and Irving Harris Concert Hall is located next door to the Benedict Music Tent, and was opened in 1993 at a cost of $7 million.  The Wheeler Opera House—a Victorian-era venue owned by the City of Aspen—is the home to Aspen Opera Theater Center productions in the summer and the AMFS’s Metropolitan Opera Live in HD screenings in the winter.