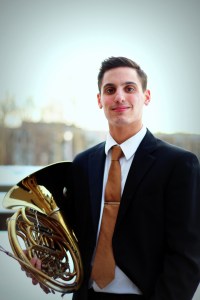 Horn player Austin Sposato is a performer, educator, and arranger based in Pittsburgh, Pennsylvania and Annapolis, Maryland.  An ardent advocate for the transformative power of contemporary instrumental music, Austin works to connect with audiences through music in the concert hall as well as non-traditional and DIY spaces.

Austin is the 2nd horn of the Westmoreland Symphony after winning the one year position of 4th horn for the 2018-19 season.  In Pittsburgh he is an active freelancer and a regular performer with groups such as The Brass Roots and Resonance Works Pittsburgh.  He has also collaborated with the South Florida Symphony Orchestra, Video Game Orchestra, Nassau Pops Orchestra, and the Three Village Chamber Ensemble.

He is a founding member of Anima Brass, which was selected as the 2016 Aspen Music Festival fellowship brass quintet.  He appeared on concerts with the American brass quintet in Aspen and Salida, CO performing brass music from the high renaissance.  With Anima Brass he has pursued his passion for new music, collaborating with composers on commissions and premieres of new works for brass quintet in New York and Colorado.

In 2018 he was a fellow at the National Orchestral Institute in College Park, Maryland.  He recorded an album of American music for the NAXOS label with the NOI Philharmonic and can be heard as principal horn on Aaron Copland’s “Outdoor Overture” with James Judd conducting.  His other festival appearances include the Aspen Music Festival where he performed with the Aspen Festival Orchestra, Aspen Chamber Symphony, and Aspen Philharmonic, and the Imani Winds Chamber Music Festival.