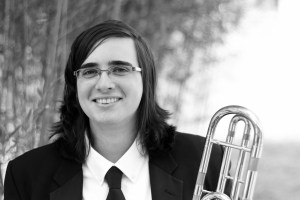 Trombonist Michael Lockwood is a versatile and passionate musician that understands the role of the trombone in many different genres.  This has led him to a wide range of concert experiences including performing with Ryan Snow and the Bandits,  Nelson Y Su Combo, opening for Blood, Sweat, and Tears, and performing in China in 2011 with the KSU Symphony Orchestra.  Mr. Lockwood has also held principal positions in the Stony Brook Symphony Orchestra at Stony Brook University where he is currently studying with American Brass Quintet trombonist Michael Powell and working towards a masters degree in trombone performance. He attended the 2016 Aspen Music Festival  with his brass quintet, Anima Brass, which was selected for the 2016 Brass Quintet Fellowship. He attended the National Brass Symposium in the summers of 2011 and 2012 as well as the Southeast Trombone Symposium in 2012 where he participated in masterclasses with New York Metropolitan Opera Trombonist Denson Paul Pollard.  He also attended the 2014 Bayview Music Festival studying under the Spectrum Brass Quintet and the 2013 Boston Brass Music Camp in Gunnison, Colorado studying with the Boston Brass.